Isla Jaina is a small limestone island off the coast of the Yucatán Peninsula. Only a small tidal inlet separates the island from the Campeche mainland.

Once upon a time, the island was a burial site for persons of the Mayan elite. There were also Mayan towns and villages here, as well as on the nearby island Isla Piedras.

The name Jaina is believed to come from the Yucatán Maya term hail na, which roughly translates into watery house. It is possible that the island was selected as a burial site since it is located to the west of the mainland. For the Mayas, the west was associated with death, since the sun sets in the west. 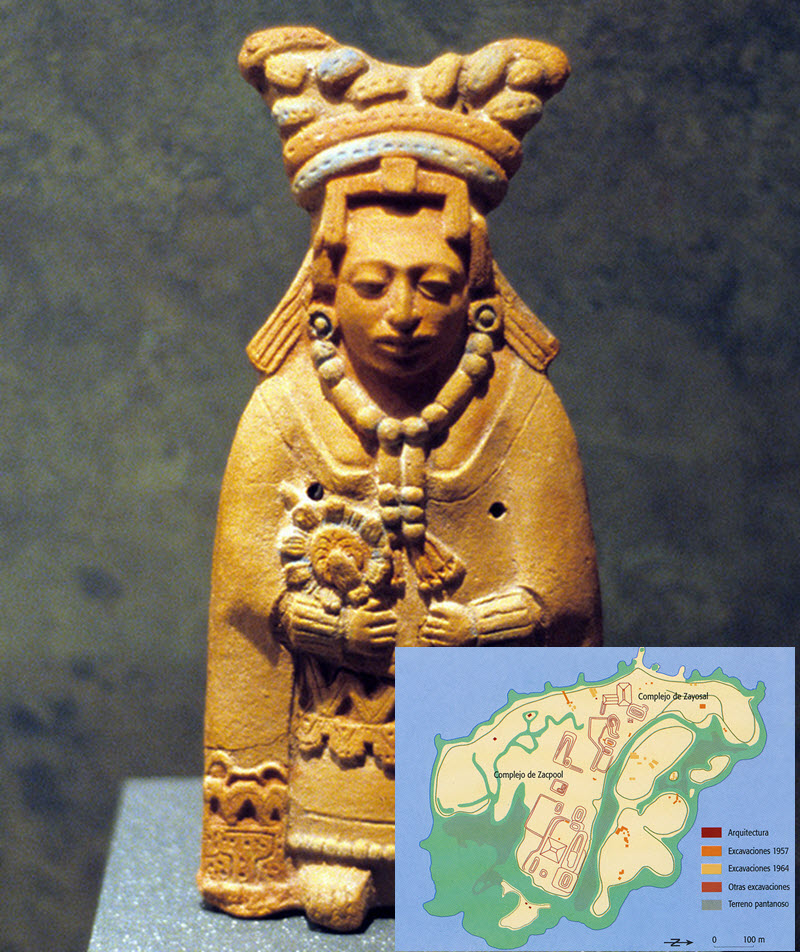 Isla Jaina was settled around the year 300 AD, and abandoned roughly 900 years later. The population peaked during the Late Classic and Terminal Classic eras.

The main ruins are two plaza groups and a ballcourt.

There are about 20,000 Mayan graves on Isla Jaina, but only slightly more than a thousand of them have been excavated by archaeologists. We still have a lot to learn from this site.

Bodies buried at Isla Jaina were typically accompanied by at least one ceramic figurine placed on their chest or in their hands. It was also common to place glassware, slateware or pottery in the grave.

The type of figurines found in the graves here are not unique to Isla Jaina; figurines of this style occur at many other Mayan sites as well, e.g. in the Usumacinta River delta region. Still, they are commonly referred to as Jaina-style figurines, regardless of where they are found.

The production of Jaina-style figurines can be divided into three phases:

During Phase I, nearly all figurines were hand-modeled instead of being created from molds. Once the clay had dried, pigment was applied. Generally speaking, figurines from this phase are considered the most elaborate and skillfully made ones. Most of the found Phase I figurines are hollow, and comes either with a whistle or with clay pellets (that turns the figurine into a rattle).

During Phase II, molds became common. Once out of the mold, the figurines were often enhanced by the creator, e.g. by adorning the figurine with small clay strips, or by making incisions. Compared to the hand-modeled Phase I figurines, the Phase II figurines tend to be less detailed and more streamlined.