Chicanná is an archaeological site roughly two kilometers west of Becán, in Campeche’s Rio Bec region. This used to be a Maya town, inhabited from 300 BC and abandoned around the year 1100 AD. It is believed to have reached its peak in 300 BC – 250 AD.

The site is named after its most famous building, which features a well-preserved relief sculpture of a serpent. In Mayan, chi means mouth, can means serpent and na means house. So, Chicanná is the House of the Serpent Mouth. The building where the serpent is depicted consist of eight rooms, and there are many interior plaster walls here where animals, monsters, garments, and more are depicted. 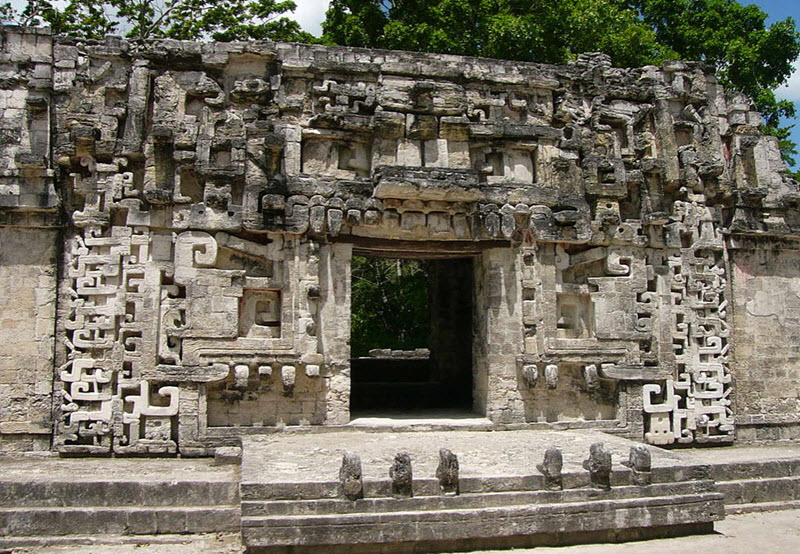 When building Chicanná, the Mayans took utilized natural elevations in the landscape to make buildings look even taller. Chicanná, which was constructed in multiple phases, was probably mostly used for religious ceremonies, and also as a home for certain powerful families.

Chicanná features an interesting mix of several architectural styles, including Río Bec, Chenes and Puuc. Most of the buildings are small, and there are no pyramids. Chicanná is famous for its well-preserved, high-quality and highly detailed decorations. The doorways are especially spectacular.

Chicanná has a core consisting of seven buildings and a Main Plaza. Structure I, II and III are parts of the Main Plaza, while the other four core structures are located right outside.

Structure I consists of six rooms, and there are five risers facing the plaza. The structure sports four Rio Bec-style relief panels.

The oldest structure in Chicanná is believed to be Structure XI, based on the ceramic sequence of the materials found. Ceramic analysis also indicate that Structure XI is older than the Structures I and II.

Chicanná was studied by Jack Eateon in 1966 as a part of this Yucatán explorations.

Structure II, the most well-known of the buildings at the site, was studied through excavations in 1970.

According to one theory, Chicanná had a very close relationship with Becán and might even have been dependent on Becán for much of its existence. Examples of Mayan sites located not far from Becán are Chicanná, Calakmul, Balamku, and Xpuhil. According to one theory, certain people who wielded a lot of power in Becán actually lived in Chicanná rather than Becán.

Becán was occupied by the Mayas from the Preclassic period (around 550 BCE) and grew into a major population center a few hundred years alter during the late Preclassic era. Even after a population decline in the early Classic (circa 250 BC), Becán remained significant site.