The Mayas started building Balamku from around the year 300 BC, but the most notable buildings here are from the 300 – 600 AD period. Balamku was built upon a karstic plateau with poor drainage, within a region the archaeologists refer to as the Campeche Petén. To the east and the west, Balamku is bordered by bajos, lands that are flooded during a significant part of the year. 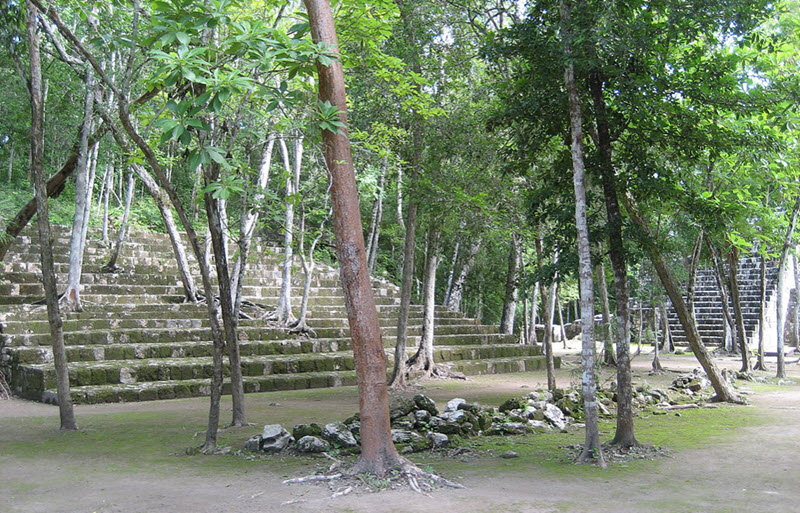 Balamku was occupied from around the year 300 BC, during the Late Pre-Classic period.

The oldest buildings on the site has been dated to the transition period from late Pre-Classic to Early Classic period.

Human occupation of the site continued through the Terminal Classic period, between 800 and 1000 AD.

Balamku is located 3 km north of the highway running between Chetumal and Escárcega.

The scientific community found out about the ruins in the 1990s, partly due to the work of Mexican archaeologist Florentino García Cruz. Together with custodians from the Instituto Nacional de Antropología e Historia, Cruz was in the area in 1990 to investigate reports of archaeological looting. They encountered a trench dug by looters, and those looters had partly uncovered a painted stucco frieze.

Rescue work commenced promptly, but it would take until 1994-1995 before the site was excavated. This project was carried out by a group headed by Mexican archaeologist Ramón Carrasco. The group consisted of two teams of archaeologists; a Mexican one that focused in the central part of Balamku and a French group that dug more to the south.

As mentioned above, the ruins form four different groups at the site: Central, North, South and Southwest. Of these, the Central group and the North group are closer to water sources than the other two. The oldest discovered ruins in Balamku (dated to the transition period from Late Pre-Classic to Early Classic) have been found in the Central and South groups, but this could of course change if excavations are resumed again, since there are still many parts of Balamku that are unexplored by archaeologists.

This is the group where a stucco frieze was partly uncovered by looters. This frieze was then fully excavated by archaeologists under the direction of Instituto Nacional de Antropología e Historia.

This group has been mapped but not yet excavated by archaeologists. It contains six plazas bordered by structures, and some of these structures are taller than 15 meters.

At least two burial spots have been excavated here, including one where an elite member of society had been buried.

This group consists of two structures that form an astronomical complex.