Calakmul is a Maya archaeological site located in Campeche, roughly 35 km north of the Guatemalan border, within the 1.8 million acre Calakmul Biosphere Reserve. Once upon a time, Calakmul was one of the largest and most powerful cities in the Mayan lowlands, and it was involved in a long-lasting powerstruggle with Tikal.

The people who once inhabited Calakmul didn’t use this name; they called the city center Ox Te’ Tuun, which means Three Stones and might be a reference to the triadic pyramid structure. Another ancient name associated with the site is Chiik Naab’, which probably referred to not just the city center but to the whole metropolitan area. The name Calakmul is a modern-day invention, coined by the archaeologist Cyrus L. Lundell in the 1930s. In Maya, ca means two, lak means adjacent and mul is a pyramid or artificial mound.

Approximately 6,750 ancient structures have been discovered at Calakmul. The largest one is the 45+ meter tall pyramid – one of the tallest of all the Mayan pyramids. Within this pyramid are four tombs. 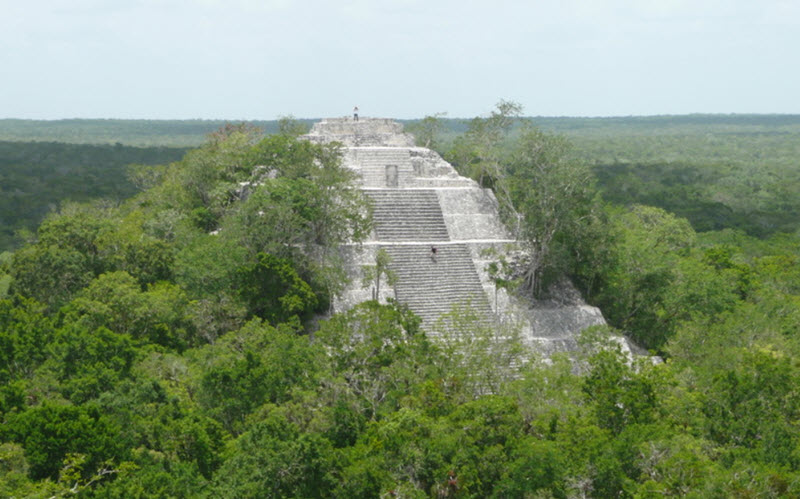 The whole site: Circa 20 square kilometers (of mostly residential structures)

The city was build on a 35 meter tall natural limestone dome located next to a lowland area that seasonally turns into a swamp. This 34 x 8 km large wetland, today known as El Laberinto bajo, was an important water source for the city. The Mayans created a complex system for water-control here that involved features such as canals and gullies. The Inner Calakmul was encircled by this water-management system.

The wetlands provided the city with two other notable benefits:

At its peak during the Late Classic period, Calakmul had an estimated population of around 50,000 people.

During the Terminal Classic period, the city population dropped dramatically and the rural population size fell to 10% of its peak level.

Divine Lords of the Snake

The Calakmul lords called them selves k’uhul kaanal ajaw, which means Divine Lords of the Snake. Their emblem glyph was the snake head sign (pronounced kaan). The part of the northern Petén Basin ruled from Calakmul is therefore sometimes referred to as The Snake Kingdom or Kingdom of the Snake in English.

The Snake Kingdom existed during most of the Classic period. At its peaks, its governing powers reached as far away as 150 km, and the kingdom contained an estimated 1.75 million people. 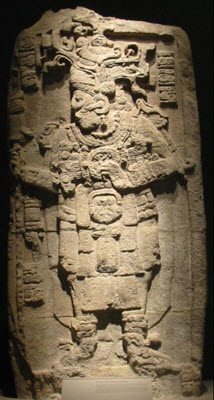 When Spaniards first arrived to the area in the early 1500s, they came in contact with Yucatec-speaking Kejache Maya who might have been the descendants of the people who once built and inhabited Calakmul.

The sites first mentioning among modern-day scientists is from 1931, when biologist Cyrus Lundell spotted it by air while working for the Mexican Exploitation Chicle Company. The following year, he informed the archaeologist Sylvanus G. Morley at the Carnegie Institute at Chichen Itza. By then, Lundell had discovered over 60 stelae here. Soon, Morley arrived to map the site, and he recorded over 100 stelae. Archaeological exploration of the site continued until 1938, when it was halted, and it wasn’t resumed again until 1982.

In 1982, William J. Folan directed an exploration here on behalf of Universidad Autónoma de Campeche. This project continued until 1994.

Today, Calakmul is being explored by Instituto Nacional de Antropología e Historia (INAH). The current director of the project is Ramón Carrasco.