This is a 7,321 km2 large biosphere reserve in Campeche’s Calakmul Municipality, at the base of the Yucatán Peninsula and bordering Guatemala to the south. Established in 1989, the reserve is listed as a IUCN category VI protected area with sustainable use of natural resources. Its Spanish name is Reserva de la Biosfera de Calakmul. 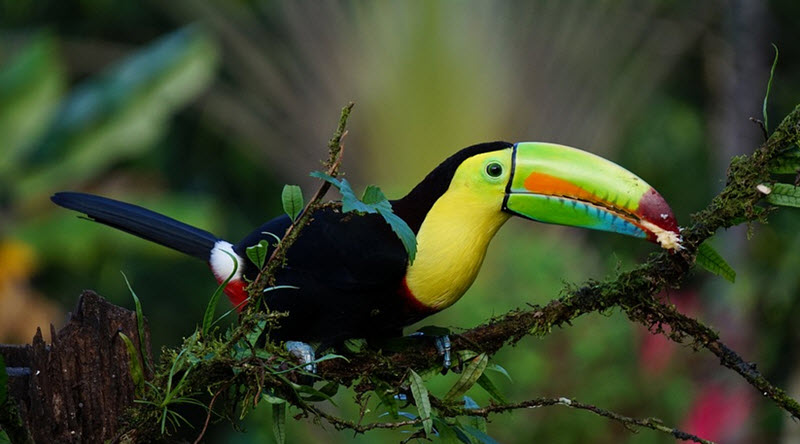 The reserve includes the Calakmul archaeological site, which is one of the world’s largest known Maya sites. You can find more information on our page about Calakmul on this site.

The forest in the reserve can be broadly divided into two types:

Examples of tree species within the Calakmul reserve:

The Calakmul reserve is home to a large selection of different typespecies of orchids.   Among these orchids you find several different species of Dendrobium, Catasetum and Cattleya.

86 different mammal species have been reported from the reserve, including five of the six species of large cats native to Mexico. (Bobcats do not live anywhere in Yucatán; in Mexico they are only found much farther north.) The reserve is home to ocelots, jagarundis, cougars, margays, and jaguars. The jaguar population is not large, but it is in good condition.

Other examples of animals living in the reserve:

Threats against the continued preservation of the reserve include:

Since the 1980s, the number of people living within the reserve has increased dramatically, partly due to migration from the outside and partly because of population growth from within. As a result, the impact of agriculture and subsistence hunting and poaching have increased. Also, military units on active duty in the area are known to engage in poaching. Estimates show that about 80% of the hunting within the reserve is for consumption among the local people.

Since the reserve was given UNESCO designation, the number of tourists have increased, which has created a shortage of potable water among the local residents.

Two main roads have been built straight through two very important areas of the reserve.

In the 1960s, the Mexican government enacted land distribution projects that draw settlers to what is now the reserve. These settlers, who engage in subsistence farming, came not just from Yucatan but from many different parts of Mexico.

In 1991, a few years after the creation of the reserve, the Mexican president gave the local subsistence farmers “care for the reserve”, promoting the idea that the farming sector should continue to exist within the reserve. This has caused friction with environmentalist groups that see the agricultural practices and population growth as a threat to the wildlife within the reserve, and actors within the tourist industry who fear that exploitation by locals will make the reserve lose its appeal to visitors looking for wildlife experiences.